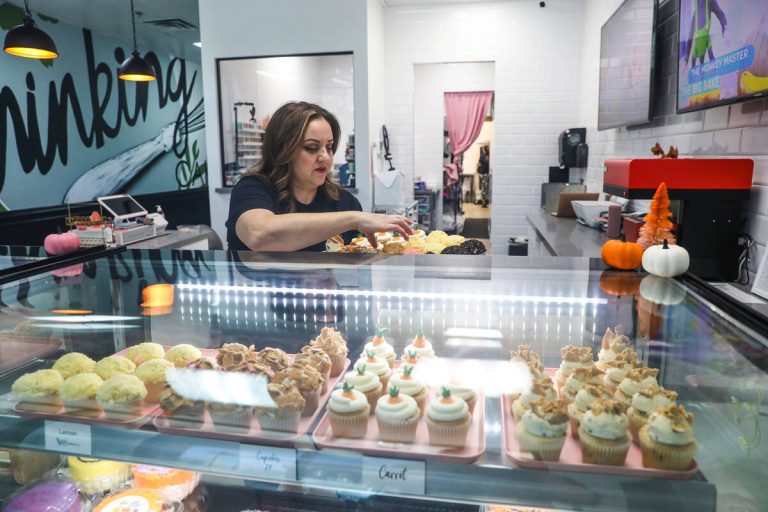 Korey Wells, the face and co-owner of Whiskful Thinking Cakes in Summerlin, started out to be a children’s book illustrator. After a brief stint in the art world — and a much longer spell in hospitality management, including on the Strip — Wells finds herself back at the art.

But this time, she’s swapped brushes and drawing paper for a piping bag and the surfaces of custom cakes. “The two go hand in hand, actually,” Wells said of illustration and cake decorating. “The buttercream is just like paint.”

Wells started out making birthday cakes for her daughters and mom groups. That casual pastry grew into a cottage business in 2018, which led to a casting agent recruiting Wells and two cottage colleagues for “The Big Bake,” a Food Network competition series. Their episode aired Sept. 19, with the team taking second.

By 2021, the year Wells filmed “The Big Bake,” her cottage gig had outgrown its home premises. A client offered to invest in a regular bakery. Construction started on the South Fort Apache space in January; Whiskful Thinking opened its doors on Mother’s Day.

Today, the business of baked goods is broad and competitive, encompassing everything from silly rainbow bagels and top-heavy doughnuts aimed at 8-year-old palates to traditional viennoiserie (with modern updates) to the custom cakes of Whiskful Thinking. Social media influences the entire industry, launching trends, then spreading them like good frosting.

As Whiskful Thinking crosses the six-month mark, Wells said she wanted her reputation for custom cakes to help expand the other side of her business: cupcakes, lunch box cakes (for one or two), nostalgia pastries and other small baked goods.

“I want to keep it creative, keep it artisanal. I want to become a mainstay,” Wells said. “I just want people to eat good cake.”

The latest for weddings

Thanks to social media, TV baking shows and modern baking methods, people often assume cakes can be shaped into almost anything. One day, Wells might be called upon to make a Lamborghini cake, the next day a Rubik’s Cube and the next day a disco ball.

“Sometimes, it’s hard to translate what people want,” Wells said. “It’s taught me to use the tools around me. I walk into Home Depot and see hundreds of cake tools. Someone else says, ‘That’s a lawn trimmer.’ ”

Wedding cakes, a significant slice of Whiskful Thinking business, have returned to traditional tiers, with neutral tones, and perhaps some florals or edible-paper ruffles, Wells explained, unlike the colorful architectural ziggurats (or cupcake cascades) of 15 years ago.

That said, wedding cakes still have their moments, like one Wells created with the couple’s goldendoodles on top eating the frosting.

The recipe calls for PVC pipe

Tools (and ingenuity) were certainly deployed during “The Big Bake” challenge. The episode was “Halloween: Creepy Clowns,” a theme that required the team to bake, sculpt and engineer.

“We had a robotic motor that was used to build the moving hand of the clown so that when the motor was turned on, it lifted the arm up and down,” Wells said. (Remember, this was a cake.) “We used PVC pipe and foil. We used Rice Krispies for bulking up things. It creates volume you can cover in fondant.”

Back at the bakery, Whiskful Thinking offers bakery cakes in two dozen flavors, like chocolate hazelnut or strawberry guava, as well as create-your-own specialty cakes with choice of flavor, filling, crunch and buttercream, plus the obligatory gluten-free options.

Pregnancy cravings don’t have to mean sausages schmeared with toothpaste; they can lead in delicious directions, too. When Wells was pregnant, she had a mighty yen for Ding Dongs, the cream-filled chocolate cakes produced by Hostess for nearly 50 years.

She developed her own version of the chocolate-glazed pucks, and today, wrapped in colored foils, they’re among the small baked goods sold from the Whiskful Thinking bakery case. Other baked nostalgia is being considered for the menu: classic whoopie pies, oatmeal pies inspired by Little Debbies, a take on Dunkaroos returned from the ’90s.

“I want to bring that kind of thing back, but elevated,” Wells said. “Things we remember. Things that feel homemade and special but made by a bakery. We’re like the kids who never grew up.”

“The cupcakes are not cloyingly sweet,” Wells said, and rotating their flavors is one way “to engage the community and get people to come in and see what’s new on a weekly basis.”

No sheet cakes for you

But you’ll never see these ingredients (or any others) incorporated into a sheet cake. Other than a kitchen cake for a wedding, Wells doesn’t do basic rectangles.

“I loathe sheet cakes,” she said with a laugh. “I don’t want to get stuck doing those all the time. I don’t even make them for my family. It’s such a boring surface. The fun thing about cakes is dimensionality, things that go high and around and depth.”

In other words, more work for the paintbrush. Er, piping bag.