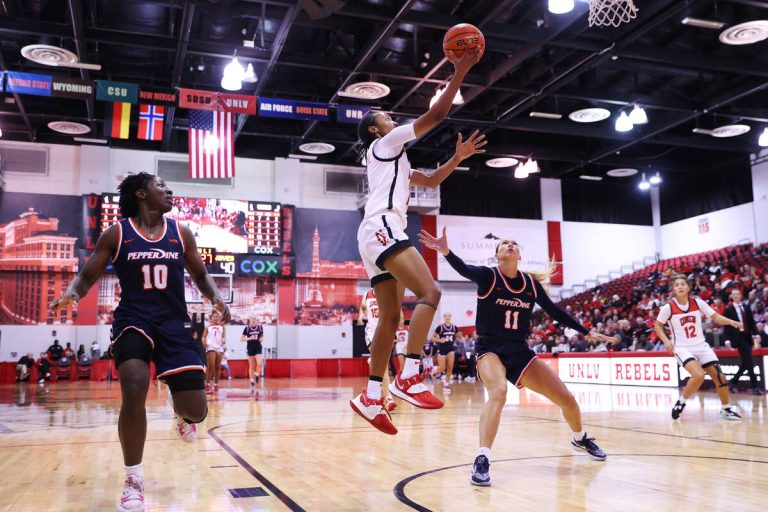 She admits Owen is more fiery on the sidelines but said that’s what the team needs.

“He’s very aggressive,” Booker said. “He just wants to win. He’s very passionate, and I felt like it rubbed off on us and we carried that into the game.”

Despite not having La Rocque — who announced on Sunday she had given birth to her first child — the Lady Rebels didn’t miss a beat. The reigning Mountain West champions rolled past Pepperdine 80-58 in their season opener Monday night at Cox Pavilion.

Owen, who is filling in for La Rocque as she recovers from her pregnancy, said he was pleased with the poise the Lady Rebels showed in their first regular-season game.

“They’re going to have to be able to stick together,” Owen said. “When someone makes a big shot or they’re making a run, we have to be connected and stay together. I really felt like we did a good job of that.”

UNLV shot 66.7 percent from the field in the first quarter to take an eight-point lead.

The Lady Rebels pulled away in the second quarter as they went on a 12-0 run to increase their lead to double-digits. They limited Pepperdine to 31.3 percent shooting from the field and went into halftime with a 42-27 advantage.

Owen said an emphasis coming into the game was controlling the offensive boards. Consider that mission accomplished. UNLV limited Pepperdine to nine offensive rebounds after it allowed 22 in its exhibition win last Wednesday.

UNLV held a 38-16 advantage in points in the lane. Owen credited the play of sophomore forward Alyssa Brown off the bench for the advantage UNLV had inside.

In 20 minutes, Brown had nine points and four rebounds. Brown’s teammates felt the impact she made on the floor.

“Alyssa always comes in and gives us a spark and brings the energy,” said Ethridge, who added nine rebounds. “She’s always coming in and getting big rebounds. She’s just a good component to have on our team.”

Owen said the game felt normal to him despite moving one chair over on the bench. Before the game, he said La Rocque gave him some advice, reminding him to be himself.

While there is no timetable for La Rocque’s return, Owen said his focus is on maintaining the program’s standards while La Rocque is gone.

“I want to protect it,” Owen said. “Protect what Lindy has already built here, what our staff has built, what our team has built, and just continue to try to do the very best we can day by day.”

Both Booker and Ethridge said that while it’s not La Rocque’s voice they’re hearing on the sidelines, nothing has changed.

“We handled business,” Ethridge said. “With Lindy being gone and coach Owen stepping up and filling that void, I feel like we brought a lot of energy and that motivated us.”

UNLV’s next game is at 5:30 p.m. Friday against Oral Roberts at Cox Pavilion.