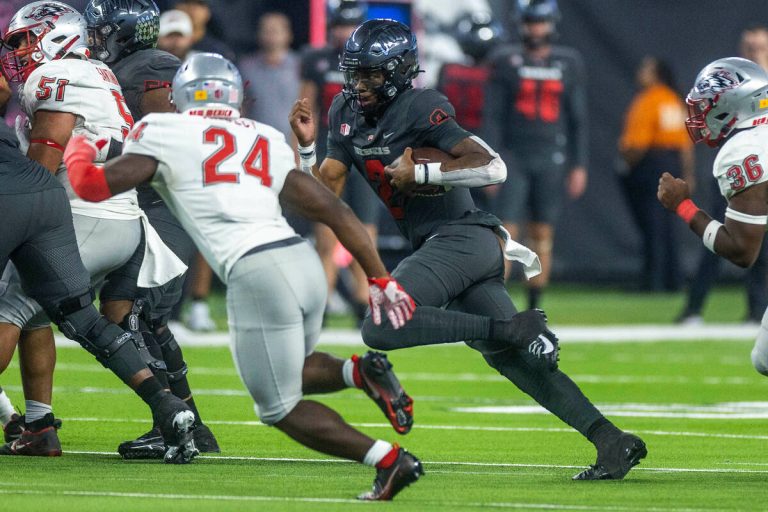 Doug Brumfield was a freshman quarterback at UNLV when he received his first taste of college ball against Wyoming. Later that evening, while walking with his parents, Brumfield’s phone began ringing.

“Since then, we’ve talked every week. I’ve always known about him, being an African American quarterback and looking up to the guys who came before us.”

There is no greater compliment to bestow a UNLV player, no better comparison for which to be included than to be mentioned in the same breath as Randall Cunningham. Brumfield is aware.

Cunningham stands alone in the annals of UNLV’s program — he’s the only Rebels football player to have his number retired — having been inducted into the College Football Hall of Fame in 2016.

He played for four NFL teams and ranks third all-time for rushing yards by a quarterback.

Brumfield, who will lead the Rebels against Fresno State on Friday night at Allegiant Stadium, is a player who has forged a relationship with Cunningham far beyond 100 yards of turf.

“Doug is an amazing kid,” Cunningham said. “I think he could (one day) be an NFL player and first-round draft pick if we take care of him and keep him healthy. He’s developing into a great leader. He’s only a sophomore. He reminds me of myself, just instead slinging it from the (left) side.”

You see why so many have made the connection between Cunningham then and Brumfield now. The former stands 6-foot-4 and Brumfield 6-5. Big arms, capable of making plays with their feet, all spindly and athletic.

YouTube clips. That’s where Brumfield has studied Cunningham the most, where he has witnessed the brilliance that created such a historic UNLV career.

The passes, the runs, the moves, the leadership.

“I watch and say that one day, I’m going to do stuff like that here,” Brumfield said. “We talk about football and life, about ways to be a better man as well as a football player. It’s really just motivation, when people see that type of potential in you.”

He returned against San Diego State last week after missing nearly three games from a concussion and ankle injury, a 14-10 win by the Aztecs. There was some obvious rust to Brumfield. He wasn’t the quarterback who led the Rebels to a 4-1 start. He hopes that changes Friday with a game now back in action under his belt.

The good news for UNLV: A preseason goal of becoming bowl eligible remains more than possible and would take winning two of a final three games — home to the Bulldogs, at Hawaii and home to UNR.

No matter which way things go, Brumfield will assuredly hear from Cunningham.

“I’m working hard to get better and better,” Brumfield said. “When we talk, he gives me lots of tips. What I did right, what I did wrong, what I need to work on, what I need to do to take the next step forward. Hopefully, the sky is the limit.”

Here’s something else Cunningham admires about Brumfield: The player’s maturity.

“Nowadays, the younger generation is different,” said Cunningham, senior pastor at Remnant Ministries in Las Vegas. “We’ve tried to make things easier on our kids. They’re a little more light going, a little more sensitive. Doug, though, is a kid who gets it. When I talk to him, I just encourage. My whole thing is that if I can encourage people, I’m fulfilling part of my assignment (in life).”

There is no greater compliment to bestow a UNLV player, no better comparison.

Be sure of it. Doug Brumfield is aware.

Ed Graney is a Sigma Delta Chi Award winner for sports column writing and can be reached at [email protected] He can be heard on “The Press Box,” ESPN Radio 100.9 FM and 1100 AM, from 7 a.m. to 10 a.m. Monday through Friday. Follow @edgraney on Twitter