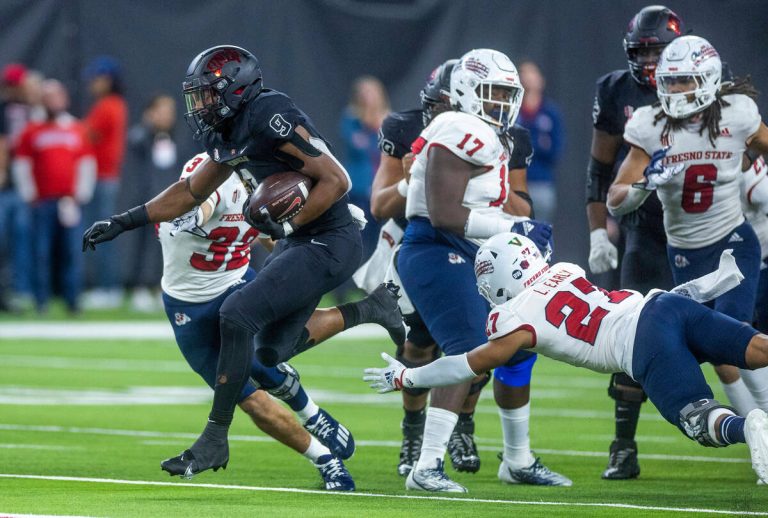 UNLV and Aidan Robbins had been in this position before. Literally.

Just one drive earlier, UNLV faced fourth-and-1 on its own 34-yard line. Fresno State packed the box, but Robbins, a junior running back, found a crease and burst through for a 66-yard touchdown. A two-point conversion tied the game at 27 with more than nine minutes remaining.

Fresno State responded with a quick touchdown, and two minutes later, facing fourth-and-1 on its own 34-yard line again, UNLV gave the ball to Robbins. This time, he was immediately wrapped up for a 1-yard loss as two Fresno State defenders flew in unblocked from the left side.

“They had a really good defensive call on that,” Robbins said. “We simply didn’t execute.”

The Bulldogs took the ball over on downs and eventually kicked a field goal to take a two-score lead.

Despite hanging with Fresno State for more than three quarters, UNLV lost 37-30 on Friday at Allegiant Stadium, doomed by red-zone execution.

It was UNLV’s fifth consecutive defeat. Now, the Rebels (4-6, 2-4 Mountain West) must win their final two games against Hawaii and UNR to achieve bowl eligibility.

“We didn’t finish it off,” UNLV coach Marcus Arroyo said. “Now we’ve got to go back to the drawing board and do it all over again.”

The Rebels fixed most of their issues from last week’s 14-10 loss to San Diego State. UNLV took care of the ball, and sophomore quarterback Doug Brumfield looked more settled, even though he was playing behind an offensive line that was missing starting right tackle Tiger Shanks because of a lower body injury.

Brumfield completed 18 of 33 passes for 172 yards and also rushed for 60 yards and a touchdown, rediscovering his control of the Rebels’ offense. Junior Kyle Williams was Brumfield’s best target, hauling in six catches for 43 yards.

Robbins remained the Rebels’ best offensive weapon, though, running for 144 yards and a touchdown on 26 carries.

Robbins’ running and Brumfield’s scrambling ability helped the Rebels control the pace of the game early, as UNLV held possession of the ball for more than 20 minutes of the first half.

However, the Rebels struggled to find the end zone. Sixth-year kicker Daniel Gutierrez was 5-for-5 on field goal attempts, setting a school record for the most made field goals in a game, but four of his attempts came from inside the Fresno 25.

“We need to finish those with sevens,” Arroyo said.

The Rebels’ biggest missed opportunity came with less than 30 seconds remaining in the first half, when sophomore Ricky White was unable to catch a well-thrown fade by Brumfield on third-and-goal. UNLV settled for a field goal to go into the break leading 16-14.

UNLV needed as many points as possible facing Fresno State. The highest-scoring offense in the Mountain West entering Friday, the Bulldogs never punted.

Quarterback Jake Haener went 28-for-34 for 313 yards and three touchdowns, and UNLV only forced one turnover — a fumble in Bulldogs territory that resulted, predictably, in a Gutierrez field goal.

“Every possession matters against an experienced team like that,” Arroyo said.