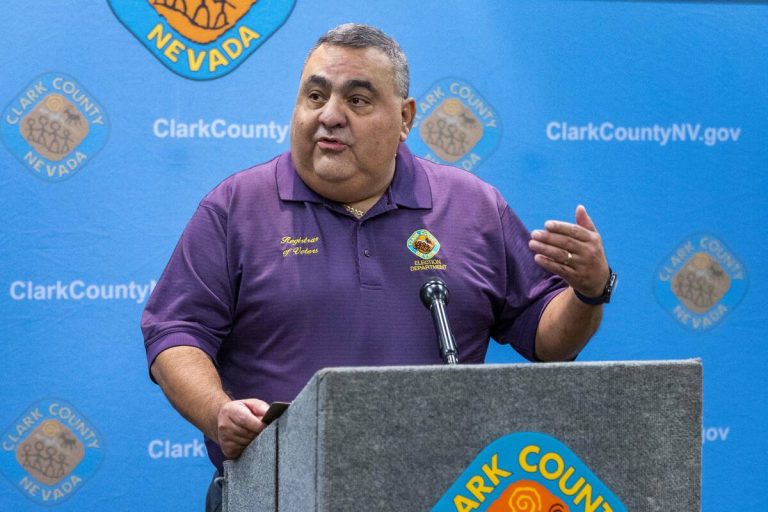 “Clark County, Nevada, has a corrupt voting system (be careful Adam!), as do many places in our soon to be Third World Country,” Trump said Nov. 10 on his social media platform Truth Social. Trump was referring to Nevada’s Republican candidate for Senate, Adam Laxalt.

Trump also said: “Arizona even said ‘by the end of the week!’ — They want more time to cheat! Kari Lake MUST win!”

Lake is the Republican candidate for governor in Arizona. At the time of Trump’s post, Laxalt was ahead of Democratic incumbent Sen. Catherine Cortez Masto, and Lake was trailing Democratic candidate Katie Hobbs. Trump endorsed both Lake and Laxalt.

Trump’s claim ignores that election results take time to count. The duration of vote counts will depend on a variety of issues, including the number of mail-in ballots, the closeness of the results and the laws about mail ballot processing. Just because some results are not yet known doesn’t mean there is cheating going on, as Trump suggested.

“We could not speed up the process even if we wanted to,” the county said in a statement on Twitter.

The tweet said that under Nevada law, all mail-in ballots postmarked on or before Election Day and received before 5 p.m. Saturday can be accepted and processed. Election officials must check every signature on mail ballots to ensure they match records. If they don’t, voters have until 5 p.m. on Monday to correct these ballots.

The state also must process provisional ballots — votes cast by people who register to vote at the polling place whose names cannot be found on a voter registration list or who have some other registration-related issue. According to Clark County, this process, which is meant to ensure that people don’t vote twice, cannot be completed until the Nevada secretary of state’s office provides reports this Wednesday.

Comments such as Trump’s get “certain people very fired up and they’re convinced that we are doing things that are inappropriate or against the law. And that’s just not the case,” Joe Gloria, Clark County’s registrar of voters, said at a midday press conference Thursday.

The margins in Nevada’s races, especially for the Senate, are extremely close, so media outlets cannot project winners until enough votes are reported. Projections from media outlets are not official results, either; those come later from election authorities.

In Arizona and Nevada, workers may begin opening mail ballots and checking signatures before Election Day, but that’s not so in every state.

Maricopa County in Arizona had a record 290,000 early ballots dropped off on Election Day.

Like other mail ballots, these ballots also must be processed, and signatures must be checked. Reviewing large volumes of ballots requires time.

If election officials identify an issue with a voter’s signature, voters have until 5 p.m. local time Nov. 16 to correct the problem.

“There’s a lot of work involved in this. We’re going as fast as we can, but accuracy matters,” Maricopa County Board of Supervisors Chair Bill Gates, a Republican, said Thursday on CNN.

Gates has said that although media outlets have projected winners in certain states, that’s because the margins between candidates in those states were large enough, not because vote counts were complete.

Trump said that election results in Clark County and Arizona are not yet known because those places “want more time to cheat.”

The number of mail-in ballots that need processing, the margins of the contests and the state’s laws for counting the votes all influence when results are reported.

That vote counting might take longer is not proof of fraud or cheating.

His claim is wrong and ridiculous. We rate it Pants on Fire!

Maria Ramirez Uribe is an immigration reporter at PolitiFact. The Review-Journal has partnered with the Florida-based fact-checking organization for the 2022 election cycle to bring readers accurate information about politician’s statements and advertising.