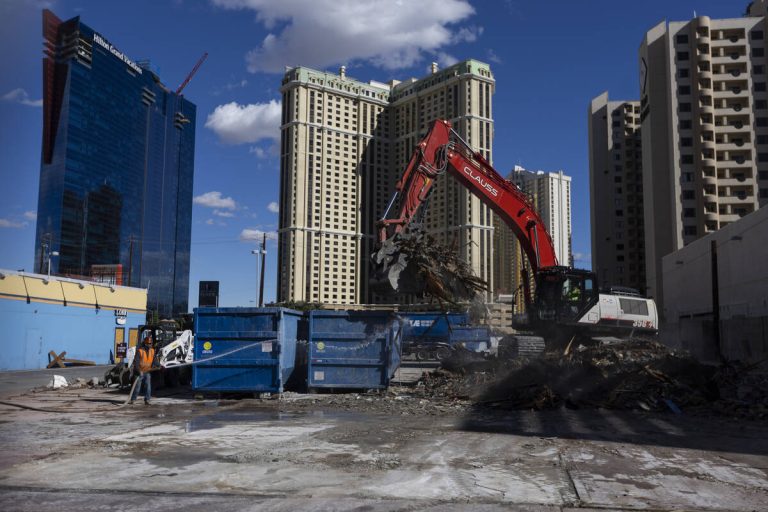 Tilman Fertitta demolished an old motel on the Strip, as the Houston billionaire pushes ahead with plans for a towering upscale resort.

Works crews recently tore down a former 1960s-era Travelodge on Las Vegas Boulevard just south of Harmon Avenue, leaving piles of concrete, wood and other debris on the site as of Tuesday. Its boarded-up lobby, in a separate building from the motel rooms, was still standing.

Nearby, a cluster of storefronts that Fertitta also purchased had been partially torn down. Tattoo parlor Vegas Ink had been demolished, while the backs of adjacent shops had been ripped down, letting passersby see mounds of demolished real estate through their still-standing storefronts.

The spread, which Fertitta purchased in June for $270 million, included the Travelodge, the Tex Mex Tequila Bar & Grill building and a cluster of now-closed souvenir shops and other retail space.

The motel, built in 1963, had closed by July. At the time, a sign in the door of the lobby declared, “We had a good run. 59+ years of service. This Travelodge is closed permanently.”

A representative for Fertitta’s namesake company, Fertitta Entertainment, said Wednesday that there were “no updates we can share at this time” on the demolition plans for the remaining buildings.

Fertitta’s project calls for restaurants, convention space, a spa, wedding chapel, auto showroom and a roughly 2,500-seat theater. It would also include suites and villas, VIP salons and a bar and lounge for high-limit gamblers, building plans indicate.

Project representative Rebecca Miltenberger told the County Commission last month that the development would be a “high-end casino resort.”

Miltenberger, an attorney with Brownstein Hyatt Farber Schreck, also provided a timeline for the undertaking.

“We are very excited to bring this project to fruition over the next two years,” she told the commission.

Fertitta, 65, oversees a corporate empire that spans dozens of restaurant brands, Golden Nugget casinos in Nevada and other states, the NBA’s Houston Rockets and the upscale Post Oak Hotel in Houston.

He also has a big ownership stake in Wynn Resorts Ltd. According to a recent securities filing, he acquired 6.9 million shares in the Las Vegas-based casino operator, a 6.1 percent stake, making him one of its largest stockholders.

Last month a spokesperson for Fertitta Entertainment told the Review-Journal there was no groundbreaking date for the resort yet.