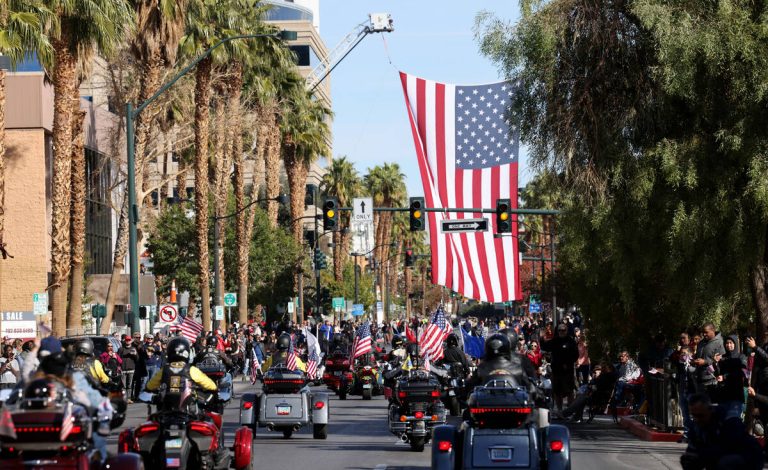 Spectators lined the sidewalks downtown Friday morning and waved American flags as they paid tribute to the Las Vegas Valley’s many veterans at the annual Veterans Day parade.

The parade started on Fourth Street and Gass Avenue and went from the south end of downtown to the northern point with spectators lining the entire route. As the floats passed by, kids on the sidelines would wave their flags and shout “Happy Veterans Day!”

“You’re not forgotten on this day,” said Evelyn Pacheco, a veteran. “But you’re forgotten any other day.”

Tony DelMonico, an 84-year-old Korean War veteran, has a lot of pride in being a veteran and has been coming to the parade the last couple of years after moving from La Jolla, California.

“I think there’s a lot of things that can be done for vets … I think we’d like to see something, a program or something that where we could eliminate a lot of the suicides for veterans.” DelMonico said. “I think the VA can do more.”

But DelMonico said it brings him joy and a sense of hope when he sees the youth at the parade. Junior Reserve Officers’ Training Corps (JROTC) programs from across the Las Vegas valley marched in the streets.

Maggie Pezzullo is the mother of a student in the JROTC program at Rancho High School. She cheered on her son and the entire class of students for one block of the parade. Her son, Brennan Pezzullo, 17, just recently signed his contact with the Navy and will be doing his boot camp training after he graduates high school.

In 2003, Pezzullo met her husband in Iraq while in the Army. She was enjoying her last Vegas Veteran’s Day parade as she’s moving in eight months.

A Royal Airman from the United Kingdom, Roger Elliott and his family were watching from the sidewalk. He believes that the way the U.S. looks after and honors its veterans is fantastic and it benefits service members overseas.

“In the U.K. you would never have anyone coming up to you saying ‘Thank you for your service,’ but now that happens all the time,” Elliott said. “And it really shows just how much the veterans and the serving members of the armed forces in this country have given to the United States of America.”

After marching in the parade, 32-year-old Yardell Bass, a National Guardsman, went to the sideline to watch the rest of the show. He marched in the parade when he was in JROTC in high school. Friday he marched in it as a service member.

He said it’s different from when he was in high school. Back then he was mainly showing support but now that he’s serving in the National Guard he realizes, “Oh, this is something for me too.”

“I just want to thank all the veterans who have served,” Bass said. “I’d also like to thank everyone I’m serving with and wish everyone a Happy Veterans Day.”

One of Bass’ fellow service members, Adrianne Lopez, said, “We’re always on the go and it’s great that we’re in this break because we can take a step back, breathe for a second and think about the sacrifices that our veterans have made in the past.”

Nolan London, 74, an Army veteran who has been in the parade for over two decades, said he’s seen attendance grow over the years.

When he first started walking in the parade, there were about 100 veterans participating, London remembered.

“A lot of guys start breaking down crying,” London said. “They’ve never been welcomed home, a lot of the guys got very emotional, big fellas too.”

“We need to recognize and celebrate for all the veterans for all the bravery and courageous hard work that they do,” said Shamish Irving, the daughter of Vietnam veteran Toby Irving Jr. “It is because of them that we are able to be on these sidewalks.”