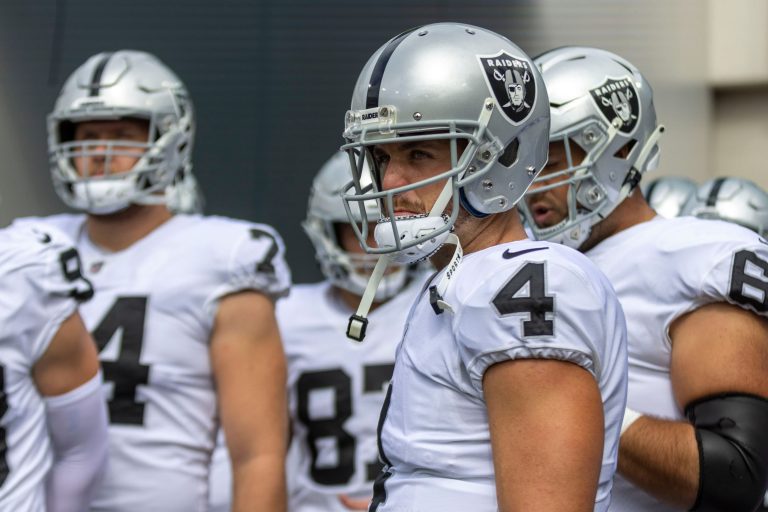 JACKSONVILLE, Fla. — The Raiders fell to 2-6 after a 27-20 loss to the Jaguars on Sunday at TIAA Bank Field. Here’s what was heard from both locker rooms afterward:

Q: We are about halfway through the season. Do you feel like you’re closer to putting a full game together now than at the beginning of the season?

Raiders coach Josh McDaniels: “Certainly, it doesn’t feel like that. Like I said, I think you earn the right to do that. We have to do it. It doesn’t matter what I stand up here and talk about or what somebody else talks about, it’s just about actions. The National Football League is unforgiving when you let up and don’t finish games. The other team plays as hard as they possibly can, too … and they earned the right to win, and we didn’t.”

Q: Second half, what was the difference? What happened with the offense relative to Davante Adams?

Raiders quarterback Derek Carr: We were calling certain things for him, and they doubled him on some plays, too, and so we thought we saw what they were doing the first half, saw what they were doing the second half. We felt comfortable in playing, and it was just a couple times where he would have had big plays. I had to run out of the pocket and try to throw it to him, and we didn’t hit him.”

Q: What made you think when you were down 17-0 that you were going to win because that doesn’t happen often?

Jaguars quarterback Trevor Lawrence: The whole energy this past week, we kind of knew we had to go get this one. You don’t try to put more pressure on yourselves than you need to, but everybody knows where we’re at in our season. We felt that and just had a lot of confidence in our prep. We didn’t score the first three possessions, but it wasn’t anything they did that stopped us. We just kind of shot ourselves in the foot. We knew offensively once we could eliminate some of those errors early and keep a drive going, we were going to be fine.”

Q: How impressed were you in how your defense shut down Raiders wide receiver Davante Adams in the second half — one catch for zero yards — after he caught nine passes for 146 yards in the first half?

Jaguars coach Doug Pederson: “We just regrouped at halftime. I don’t think there were a ton of changes. The guys were in position in the second half … they got a great pass rush. We had our chances at some interceptions … just a really good defensive performance in the second half.”