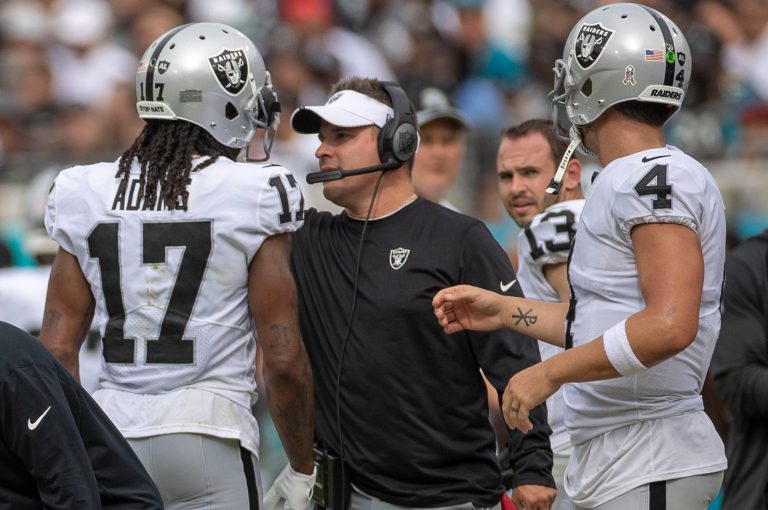 There is no coverage that Raiders wide receiver Davante Adams believes can take him out of a game.

“At the end of the day, if we’re just going to concede and say, ‘Oh, they double-teamed Tae, so it’s forcing the ball to him if we threw it to him,’ then I’ve got no business being in this building, because that’s what teams are going to do,” Adams said Wednesday. “So, if you think that the only way I’m going to get the ball is when I’m singled up, then I’m going to have four catches on the year.”

Adams eclipsed 110 catches in three of the past four seasons with the Packers and has 48 receptions for 658 yards in eight games with the Raiders. But he has gone halves and even games with a diminished role in the offense as opponents focus on taking away Derek Carr’s top option in the passing game.

After catching nine passes for 146 yards and two touchdowns in Sunday’s 27-20 loss at Jacksonville, Adams’ only reception of the second half went for no gain.

He’s just fine with the ball being thrown his way even if he might not be wide open.

“I’d like to force it,” he said when asked how to get him more involved without forcing him targets. “It is what it is. Nothing has been forced this year at all. I’ve had multiple games with like two catches, so I don’t think that we should be talking about me getting the ball forced to me. Like, that’s ridiculous. I think that when you have certain players, you do what you can do to get them opportunities, and that’s why I’m here. That’s why they paid me to come here and make plays.”

Adams, who signed a five-year, $142.5 million contract with the Raiders, has made his share of plays, but the offense has struggled to find a consistent rhythm during a 2-6 start. Sunday’s first-half explosion is what Raiders fans dreamed of when Adams was reunited with Carr, his good friend and college teammate, after spending his first eight seasons catching passes from Aaron Rodgers in Green Bay.

“It doesn’t necessarily have to be 15 targets in a half — that’s not really what it’s about, it’s about the quality,” Adams said. “I think last game was there, and there’s obviously been times where it hasn’t been even close to enough. And we know that, and you guys know that, too.

“In the Saints game, having one catch, once again, that’s not why I’m here. I’m here to be able to help this offense move the ball. And if we can move it other ways, then that’s beautiful, and I don’t need to do it. I can have one catch if we are moving it. But if we’re not moving it, then that’s obviously going to be a problem.”

The Raiders’ spot in the standings is also a problem, and it’s a new one for Adams. The Packers had six winning seasons with him in Green Bay and never finished worse than 6-9-1.

Adams expressed frustration after Sunday’s loss that was construed as criticism of the coaching staff, but he said he thinks the problems are more about executing the plays that are called than not calling the right plays.

“I don’t put anything on the coaches,” he said Wednesday. “I think that we’ve got to do our job. But when I looked at (the tape), we had plenty of opportunities. There were plays there. It’s really just execution from the players at the end of the day. Everybody’s going to try to create some division between the players and coaches just based off different things that are said, but at the end of the day, it’s about making adjustments and everybody doing their job.”

Carr said Adams has remained positive through the struggles and believes the two will continue to build on their chemistry.

“Last week, we took another step in the right direction,” the quarterback said. “He’s used to being in the same system, same guys, almost the same roster every year, and he’s learning that when you come to a new place with new coaches, the roster is going to change, the scheme is going to change. His patience level has been great, and he understands, we all understand. I wish I didn’t understand, but we all understand that it takes time, but we’re hoping that time doesn’t take much longer.”