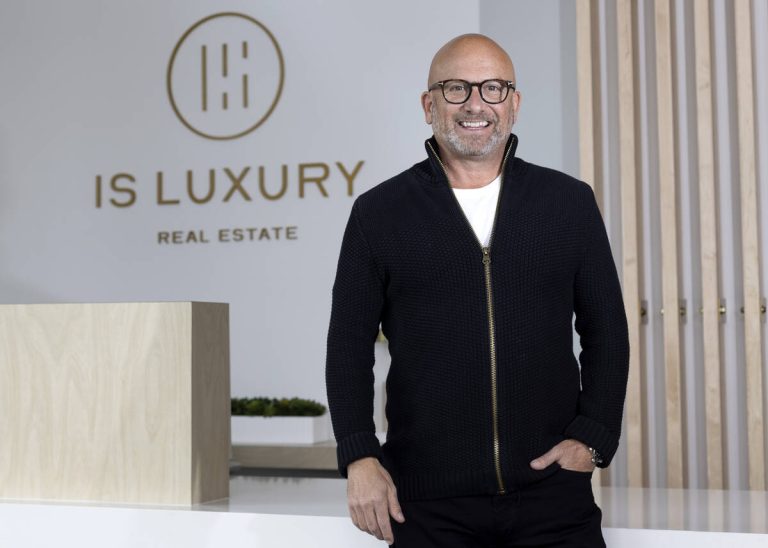 Ivan Sher has brokered some of Southern Nevada’s most expensive home sales and lands a steady stream of high-priced listings.

Now, he’s launched his own real estate firm. But instead of moving to an office building, he set up shop in an unlikely spot: Downtown Summerlin, steps from Foot Locker, Crazy Pita and Sparkles Beauty Bar.

Sher, formerly with Berkshire Hathaway HomeServices Nevada Properties, branched off last month to open an independent brokerage, IS Luxury. He has 15 agents, all of whom worked with him at Berkshire, and a 6,200-square-foot office that he said cost millions of dollars and around six months to build out.

The space, previously occupied by women’s clothing store Hottie, features an open meeting area with a long, counter-height table under three gold-color chandeliers and bottles of Champagne nearby.

Sher, 53, said he signed a lease in Downtown Summerlin because he lives in the area and because the 106-acre outdoor mall, off Sahara Avenue and the 215 Beltway, is closer than other commercial districts to wealthy enclaves such as The Summit Club and The Ridges.

He also liked the idea of being a unique tenant of sorts: a luxury real estate brokerage in the midst of a pedestrian-heavy shopping area.

His plans extend beyond Summerlin. Sher said he wants to open an office in Henderson and, in what he called, “feeder markets” such as the Lake Tahoe area; Scottsdale, Arizona; and Park City, Utah.

Many of his clients have second homes in those locations, said Sher, who envisions “a pipeline from one area to the other.”

Sher, who was born in South Africa and lived there until he was 7, moved to Southern Nevada in 2000.

Sher’s group also represented both sides of the deal when famed magician David Copperfield bought a four-story, steel-and-concrete Summerlin mansion in 2016 for $17.55 million — the most expensive home sale ever recorded in Southern Nevada at the time. The record stood until last year, when a Henderson mansion traded for $25 million in a deal that Sher was not involved with.

He also sold a 9,427-square-foot house in The Summit Club for almost $19 million this year. And in summer 2021, he listed a 14,207-square-foot mansion in Henderson for $32.5 million, the most expensive home offering in Southern Nevada in a decade.

Fueled by rock-bottom mortgage rates, Southern Nevada’s housing market accelerated to its most frenzied pace in years in 2021, and the luxury sector was no different.

“We’d sell them before they hit the market sometimes,” Sher said.

Ultra-wealthy clients took out loans because they were like “free money,” he said.

Las Vegas, which had long been known as a more affordable market, also saw a big influx of buyers from California and other states during the pandemic as people worked from home.

Southern Nevada’s housing market has hit the brakes this year as the Federal Reserve fights inflation with higher interest rates. Overall, sales totals have dropped sharply from year-ago levels, inventory has soared, and sellers have increasingly slashed their prices.

The average rate on a 30-year home loan was 6.95 percent as of Thursday, down from 7.08 percent the week before but up from 3.09 percent a year ago, mortgage buyer Freddie Mac reported.

Amid the jump in borrowing costs, 31,669 homes in Southern Nevada traded hands this year through October, down 22.6 percent, or more than 9,200 sales, from the same period last year, according to trade association Las Vegas Realtors.

The economy “doesn’t feel as stable” with higher interest rates, Sher said. The stock market, often a key source of wealth for luxury homeowners, has seen a volatile, sliding year.

Sher said he is starting to see more activity on his listings but noted that some sellers are “panicking” and dropping their prices.

Still, he figures the market will be stable next year.