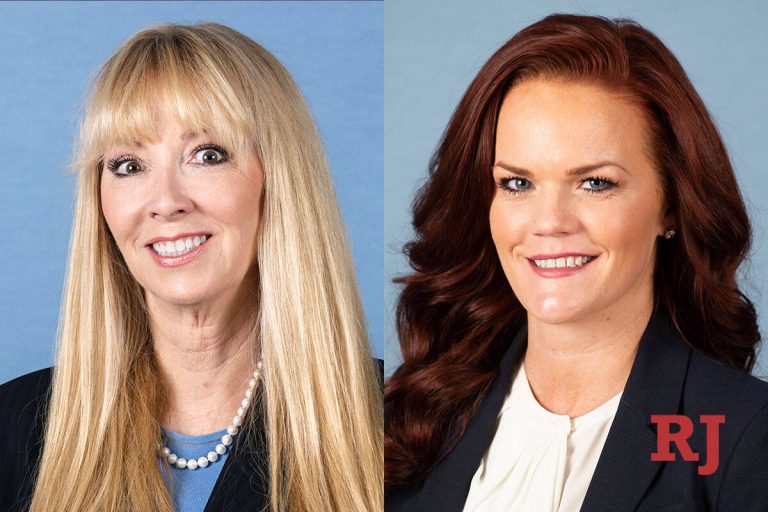 Updated election results from Clark County showed that little had shifted in the judicial races by Thursday evening.

Although all in-person votes cast on Tuesday have been tallied, races could still shift in the coming days as officials count mail ballots postmarked by Election Day. State law requires the county to accept mail-in ballots until Saturday, and to give voters until Monday to have mismatched signatures verified, Clark County Registrar of Voters Joe Gloria said during a press conference Thursday morning.

Justice of the peace races

The Department 13 race in Las Vegas Justice Court remained close as of Thursday evening. Deputy Public Defender Rebecca Saxe was leading with 50.4 percent of the vote, while incumbent Justice of the Peace Suzan Baucum trailed close behind with 49.6 percent, according to the preliminary results.

In a statement to the Las Vegas Review-Journal on Thursday, Baucum said her opponent had “worked very hard in her campaign.”

“If the numbers continue to trend in her favor as they have been and she wins I wish her nothing but the best,” Baucum wrote in the emailed statement, sent before the updated results Thursday evening.

Saxe did not reply to a request for comment.

In Department 10, Deputy District Attorney Noreen DeMonte was leading with 54.6 percent of the vote, while incumbent Cybill Dotson trailed with 45.4 percent.

Dotson was appointed to the bench in October 2021 by the Clark County Commission to replace Justice of the Peace Melanie Tobiasson, who resigned in April 2021 while facing ethics charges.

In Department 6, Jessica Goodey, a personal injury attorney and pro tem justice of the peace, was leading with 58.6 percent of the vote as of Thursday evening. William Gonzalez, a former Family Court judge, had about 41.4 percent of the vote.

The seat was left vacant in January when Justice of the Peace Rebecca Kern resigned.

Justice of the Peace Karen Bennett-Haron occupies the Department 7 seat but did not file for re-election.

Roohani, a former federal prosecutor, has served on the bench for nearly a year, since Gov. Steve Sisolak appointed her in December after District Judge Elizabeth Gonzalez stepped down.

In the race with the widest margin between candidates, appointed incumbent Maria Gall was leading in Department 9 with 62.2 percent of the vote as of Thursday evening. Attorney James Dean Leavitt had received about 37.8 percent of the vote.

Three candidates were on the ballot for Department 17, which did not have a primary because District Judge Michael Villani announced his retirement after the June election. Preliminary results showed that Deputy Public Defender Jennifer Schwartz was leading with 36.4 percent of the vote.

Attorney Adam Ganz had about 34.4 percent of the vote, while Chief Deputy District Attorney Lindsey Moors had 29.2 percent.

There were six candidates on the ballot for Family Court Department A, which was subject to a special filing period following June’s primary after Family Court Judge William Voy announced his retirement.

Mari Parladé, the legal and strategic initiatives manager for the Clark County Family Services’ legal division, was leading the race with 24.5 percent of the vote. Attorney Kristine Brewer followed with 20.5 percent.

In the statewide race for Court of Appeals’ Department 1, Chief Deputy Public Defender Deborah Westbook was leading with 51.3 percent of the vote as of Thursday evening. Current Family Court Judge Rhonda Forsberg had 24.8 percent of the vote.

The Court of Appeals is a panel of three judges who rule on about a third of cases that are submitted to the Nevada Supreme Court. Judge Jerome Tao, who presides over Department 1, did not file for re-election this year.