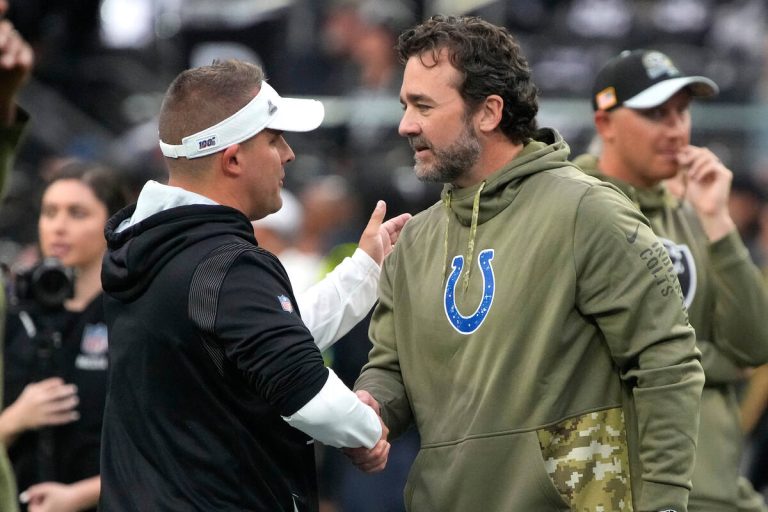 Might be time to refer to Jeff Saturday as Jeff Sunday.

The former Pro Bowl center turned ESPN analyst turned Indianapolis interim coach was awarded the game ball by Colts owner Jim Irsay on Sunday, punctuating a tumultuous week with a 25-20 victory over the Raiders and the ensuing celebration in the visiting locker room inside Allegiant Stadium.

“These guys have been through it. I told the staff, the coaches, the players, just the fortitude that they presented and the way the played today, they laid it all out there,” Saturday said.

“I’m not sure there’s a storybook ending any better for the first game.”

Under Saturday, the Colts had 415 yards of total offense compared with the 121 they tallied last week against the Patriots. He tabbed former NFL MVP and veteran quarterback Matt Ryan as the starter against the Raiders instead of second-year quarterback Sam Ehlinger, who had started the previous two games.

Ryan learned a few days ago that he might play Sunday and responded by completing 21 of 28 passes for 228 yards and a touchdown, complementing star running back Jonathan Taylor’s 147-yard outing on the ground.

“It was a whirlwind of a week,” Ryan said. “The way Jeff handled the week, it’s amazing to be sitting here Sunday evening with all that transpired Monday, Tuesday … it’s incredible to sit here at this point with a win.”

To Ryan’s point, the Colts hadn’t won since Oct. 16, prompting Irsay to fire Frank Reich on Monday and hire Saturday, who hadn’t coached beyond the high school level.

“We want to stack a lot of wins,” Saturday said, “but you can’t start the stack until you get the first one.”

The Raiders welcomed retired defensive lineman Richard Seymour on Sunday to Allegiant Stadium, honoring the seven-time Pro Bowler before the game for his induction into the Pro Football Hall of Fame.

Seymour was enshrined in Canton, Ohio, in August, culminating a 12-year career that included three All-Pro selections and three Super Bowl titles. He played for the Patriots from 2001 to 2008 before the Raiders traded for him in 2009.

Seymour lit the Al Davis Memorial Torch during the ceremony.

“It’s a tremendous honor. This honors my legacy,” Seymour said. “When you think about all of the players that have put on the Silver and Black and that rich history and that rich tradition, as a young player growing up, I was a huge Raider fan. … To be a part of that history and tradition, it means a lot.”

Days after the Raiders waived 2019 first-round pick Johnathan Abram, draft classmate Clelin Ferrell was a healthy scratch. The former No. 4 overall pick has played in 42 percent of the defensive snaps this season, totaling 10 tackles and half a sack.

“There are some things there that are internal, and we always try to do what’s for the team,” Raiders coach Josh McDaniels said. “But I know we had some guys that were inactive this week, and hopefully that would change next week.”