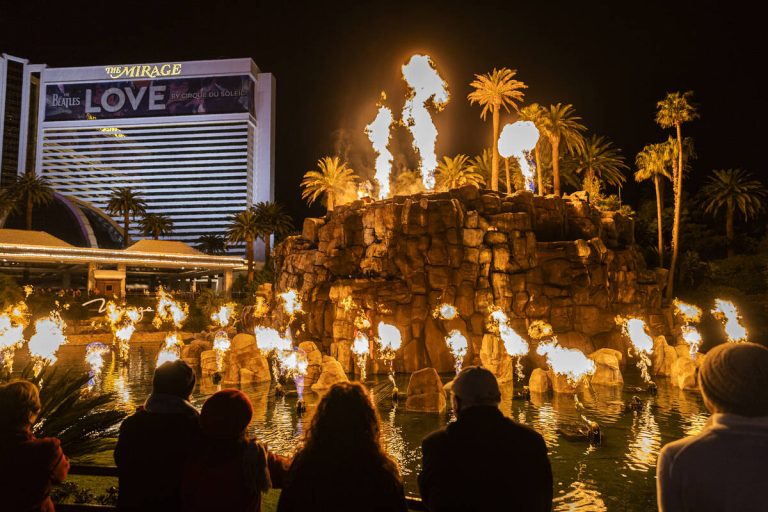 While The Mirage will have a new owner by year’s end, guests shouldn’t expect any major changes just yet.

As the iconic Strip resort prepares to switch ownership from MGM Resorts International to Hard Rock International, who acquired the operations of the resort for $1.08 billion last year, questions have loomed about how the transition will play out.

To answer the first question likely on everyone’s mind: No, the volcano show won’t close — yet.

Officials have previously said the attraction will be torn down, but “there are no current plans to change the volcano show,” according to MGM Resorts.

MGM also answered several other questions on its website about The Mirage’s future through a FAQ page shared this month.

Hard Rock, owned by the Seminole Tribe of Florida, is expected to keep the property’s name and brand for a bit longer. Part of its sale agreement includes the ability to stay branded as The Mirage for up to three years. The company expects to unveil the “property expansion” in 2025, according to a July news release.

The transfer of ownership to Hard Rock is expected to be finalized by Dec. 31, once approved by Nevada gaming regulators.

“We look to ensure a good experience for our guests with little change or disruption,” Hard Rock Las Vegas’ President Joe Lupo said in a statement Monday. “We will be implementing Hard Rock’s Unity Rewards which is available in over 150 locations throughout the United States and around the world.”

Hotel guests with upcoming stays booked during or after the expected transition time will have their reservations honored, including comp reservations. Reservation confirmation numbers will remain the same through the transition.

Rewards members that frequent the Mirage will keep their tier status, and credits and points balances won’t change. They’ll be accruable and usable at other MGM Rewards properties, the company said. MGM Rewards and Unity by Hard Rock, the company’s loyalty program, offers tier matching.

Slot machine cashout vouchers as well as casino chips that say MGM Resorts will still be redeemable after the Hard Rock takes over, the company said.

Officials said they don’t expect to close the casino floor after the ownership transfers.

“There could be downtimes after the closing of the transaction as new systems are installed but we are working diligently to mitigate any disruption,” according to MGM’s FAQ sheet.

McKenna Ross is a corps member with Report for America, a national service program that places journalists into local newsrooms. Contact her at [email protected] Follow @mckenna_ross_ on Twitter.