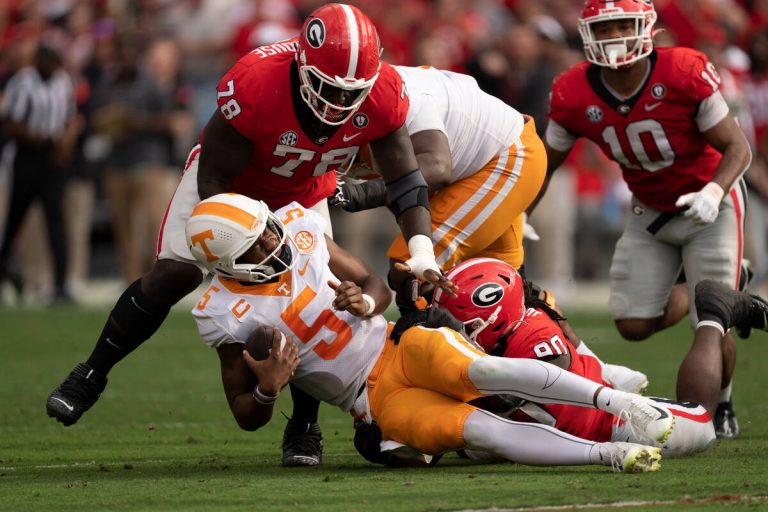 They say college football “just means more” in the South, and Saturday was a good example of why.

Two decisions from the Southeastern Conference also meant a lot to bettors and Las Vegas sportsbooks, with Georgia covering as a favorite against Tennessee and Louisiana State earning the outright upset over Alabama.

“We lost a little on the Tennessee-Georgia game, but not much. A lot of money on both sides,” South Point sportsbook director Chris Andrews said via text message. “Bama-LSU was good. But another game with good two-way action. Overall a pretty good day so far.”

The Tennessee-Georgia showdown was one of the most popular games of the season for bettors, and Red Rock Resort sportsbook director Chuck Esposito said the public was on the Volunteers, who were 10-point underdogs at most books at kickoff despite being ranked No. 1 in the first set of College Football Playoff rankings.

Approaching kickoff with this bettor liking Georgia for some BIG money 💰 pic.twitter.com/BovjxBFqdF

Joey Feazel, lead college football trader at Caesars Sportsbook, said the handle was one of the biggest-bet games of the year and rivaled some NFL games.

Bulldogs quarterback Stetson Bennett IV accounted for three touchdowns in the 27-13 win, and Georgia’s defense made a statement holding the high-powered Volunteers 36 points under their season average.

Tennessee quarterback Hendon Hooker saw his Heisman Trophy hopes take a hit after he recently was made the favorite by several sportsbooks for the award.

Also, Alabama saw its hopes of reaching the College Football Playoff dashed with a 32-31 overtime loss at LSU. The Crimson Tide were 13-point chalk at most shops but never were in position to cover.

“It was a good day for sure,” Westgate SuperBook sportsbook director John Murray said via text message. “We did great on the Georgia game, won on the Bama game.”

That outcome also benefited over bettors, who appeared doomed after the third quarter with the total closing anywhere from 56 to 56½. The Tigers led 14-9 entering the fourth quarter, and the teams combined for 40 points in the fourth quarter and overtime.

Sportsbooks also were on the right side of Notre Dame’s 35-14 thumping of No. 4 Clemson. The Tigers were favored by 3½ to 4 points.

Take one for the team

Kentucky punter Colin Goodfellow had to be taken off the field on a cart at the end of the Wildcats’ 21-17 victory over Missouri.

But his act of heroism will not go unnoticed by Big Blue fans or bettors.

Goodfellow lined up to punt with 2:25 remaining in the fourth quarter when the snap sailed over his head. The fifth-year senior tracked down the loose ball at his own 5-yard line and was able to get off a kick that went out of bounds and would have given Missouri the ball in Wildcats’ territory at the 41.

However, Missouri’s Will Norris blasted Goodfellow as he booted the ball down field and was penalized for roughing the kicker. Goodfellow was injured on the play and was in “severe pain” after the game, according to Kentucky coach Mark Stoops.

Kentucky, which closed as a 1-point underdog, retained possession thanks to the penalty and was able to run all but 38 seconds off the clock before punting. The Tigers took over at their own 13-yard line but were unable to get a drive going and the clock ran out.

With Missouri’s chance for a late score wiped out by the roughing the kicker flag, the game also stayed under the total of 40.

A bettor at Caesars Sportsbook in Nevada placed $560,000 in wagers on college football and cleaned up, going 4-0-1.

One NV bettor has $𝟓𝟔𝟎,𝟎𝟎𝟎 in CFB bets this week 🤯