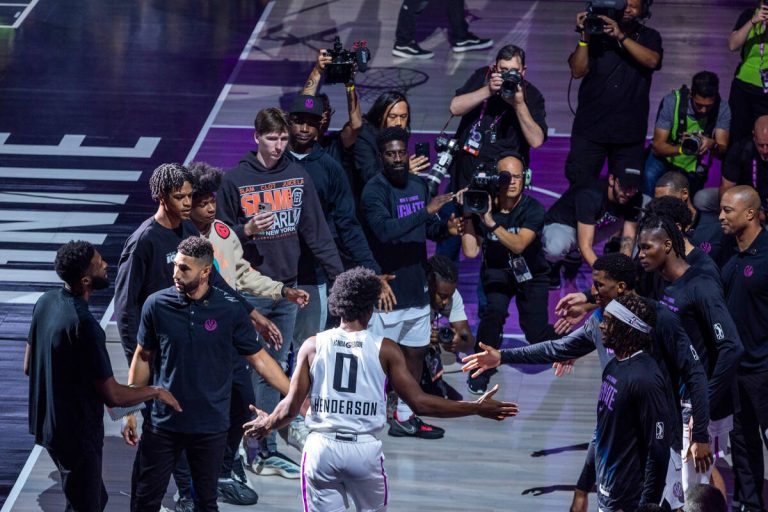 Joe Tinnel is originally from northern Ohio. He came to Las Vegas at age 12. He’s 46 now.

He attended the season opener for the G League Ignite on Friday night at The Dollar Loan Center in Henderson. Came to see even more growth in relation to Southern Nevada and its sports scene.

“To way back in the day with just Triple-A baseball here and what we have now is incredible,” Tinnel said. “There are even talks of the NBA coming, so what better way to be part of that than see it in its infancy here with the (G League)?

“We keep evolving as a valley. Now, my son is 11 and can experience all of this. That’s amazing.”

Tinnel is exactly the type of fan Ignite coach Jason Hart hopes to draw more and more of.

Just with a different ending.

It has begun, this 50-game schedule for the Ignite, the opener culminating in a 134-125 loss against the Oklahoma City Blue.

It sure was like the NBA in one way. All sorts of scoring runs.

Prime example: The Ignite blew all of a 28-point lead.

“We fouled too much,” said Hart, whose team was called for 35 fouls and allowed 80 second-half points. “An NBA game is long. It’s 48 minutes. Our defense was poor in the second half. We’re a young team. We have to grow to learn. We’ll get better from this.”

An announced gathering of 4,004 came to watch Hart’s side begin its journey here.

The atmosphere had, as you would expect, a Golden/Silver Knights feel to it. There was in-house music blaring and in-game promotions and even a marching drum band. There was a high-flying dunk contest off trampolines at halftime.

Folks even booed block-charge calls, so it was a more-than-standard gathering.

There were almost as many whistles as baskets — 63 fouls were assessed — which made you wonder how Mountain West officials secured jobs calling G League games.

The Ignite couldn’t have asked for a better start, running to a 46-22 lead after one quarter. Efe Abogidi had 17 points over the opening 12 minutes for the hosts.

The former Washington State player — who finished with 23 points — scored on hooks and put-backs, on postups and turnarounds. He set the tone early.

All the way back

But the Blue cut into the margin and climbed within 15 early in the third quarter.

That’s when Scoot Henderson scored four straight. Henderson, the No. 2 prospect for the 2023 draft, had a somewhat quiet beginning but heated up after early foul trouble. He scored a team-best 25.

Oklahoma City didn’t go away. It was a nine-point game after three quarters, and the Blue grabbed their first lead since 2-0 at 117-116 with 5:57 remaining.

“It wasn’t frustrating,” Henderson said. “That’s how basketball is sometimes — the refs like to slow the pace of the game. But that’s on us for fouling. We have to cut down on our mistakes. We have to come out in the third quarter with the same energy as we had in the first.”

And play much better with a lead.