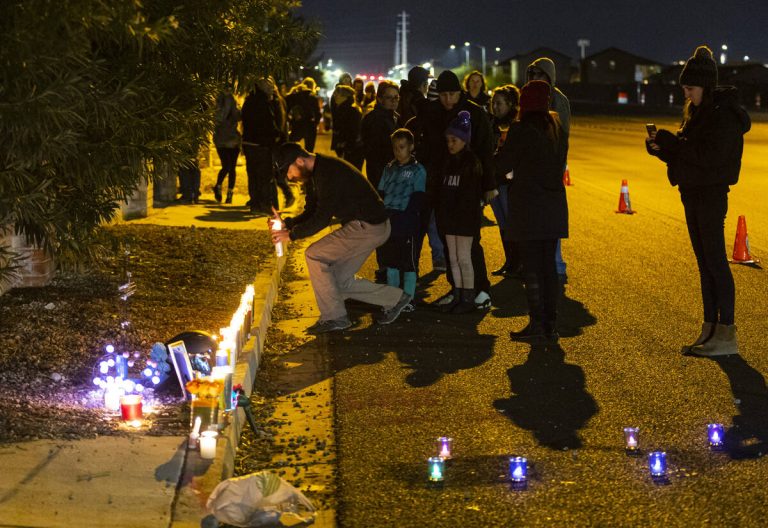 Rhiannon Nichole Sacks died doing what she loved, but she shouldn’t have, said those who gathered at a vigil on the spot where the 28-year-old motorcyclist was killed Sunday.

On a chilly night in southwest Las Vegas, family, friends and fellow motorcycle enthusiasts gathered with lit candles, hot cocoa, pizza and a lot of hugs to commemorate Sacks but also to draw attention to what they said was yet another preventable death of a motorcyclist.

“She was so young and so energetic and so goofy and just so beautiful,” said Sacks’ grieving mother, Kelly Hiler, 53. “She would give anything to anyone that needed it. She was just so kind-hearted.”

The motorcyclists at the vigil said they want drivers in vehicles to be more aware of riders on the road. To constantly be on the lookout for motorcyclists. To not be distracted by their phone while driving. To not be impatient. Or impaired. And to check their blind spots.

“So when you hear ‘look twice, save a life,’ that’s real,” said Shannon Venturo, 56, who organized the vigil and who counted Rhiannon as a close friend. “You have to be looking for motorcyclists because what we call cagers, or people that are in automobiles, they just don’t see us.”

Venturo, whose road name, or nickname among fellow motorcyclists, is Dazzlin, is president of an all-female motorcycle club called the Bling Devas. Sacks wasn’t part of the club but she was a supporter and loved being around other female riders, Venturo said.

“What we would ask the public to do is to be more aware that more people are riding motorcycles than ever before,” Venturo said.

According to the Metropolitan Police Department, Sacks was riding a Suzuki GSX-R750 motorbike east on Russell Road toward Torrey Pines Drive at about 11:25 a.m. Sunday.

At the same time, a Porsche Carrera driven by Sheridan Beaulieu, 70, which was heading west on Russell toward Torrey Pines, made a left turn, “crossing the path of travel of the Suzuki,” police said.

At the vigil, where several hundred people gathered Monday night, colorful candles marked the spot where Sacks came to rest and where she died, about several hundred feet east of where she was struck by the car. On the curb, stuffed animals, candles and other mementos surrounded framed photos of Sacks.

Sacks grew up in New Jersey and then Colorado, her mom said. Sacks joined the Navy after high school. She was based in Japan as a gunner’s mate, serving for four years.

“She just overcame so many obstacles,” Hiler said. “She really did. She was just so strong.”

“She was very mature for her age,” said her aunt, Tina Tommi. “Me and her were buddies.”

After the Navy, Sacks moved to San Diego, but it was such an expensive city to live in. Then she moved to Las Vegas, Hiler said, where she found a community of people and friends and “absolutely loved” living in Vegas.

“I’m devastated, obviously,” Hiler said. “I ride. It’s in my blood. It’s been my whole life. So, if she was going to go anyway, I wanted it to be doing something that she loved.”

One of the visitors at the vigil, Marcella Williams, said Sacks was the last person her stepson Andrew Melnichuk saw when he was killed while riding his motorcycle in 2021. Sacks had tried to comfort a dying Melnichuk, she said. In a photo provided by Williams, Sacks was spelling out “Andrew” with pieces of Melnichuk’s shattered motorcycle on the sidewalk near the crash site.

“She was the last person he saw,” Williams said. “She was comforting him as he was taking his final breaths. And that’s why we’re here to gather. Because she was there for him. And we’re here to support her family now.”

Kenny Piefer, 57, a motorcyclist who is national president of the Soldiers for Jesus motorcycle club and owner of Boulder Choppers, a custom bike-building shop in Henderson, says there needs to be more consequences for drivers involved in fatal crashes with motorcyclists.

“We want this to stop,” he said of motorcyclists being killed.

Jason Lee, 37, who lives in a home that backs on to Russell near Torrey Pines, said it’s time traffic lights were installed there. As it stands now, there are just stop signs on Torrey Pines north and south of Russell.

In the five years that he’s lived there, Lee said, there have been about one or two crashes a month at the intersection. He heard Sunday’s crash, and looked over his backyard wall to see paramedics working at the scene.

“I actually told my wife, if they don’t put a light here, somebody is going to die,” Lee said.

Lee said he hates the fact he was proven right, and he said he’ll be doing whatever he can to get traffic lights installed.