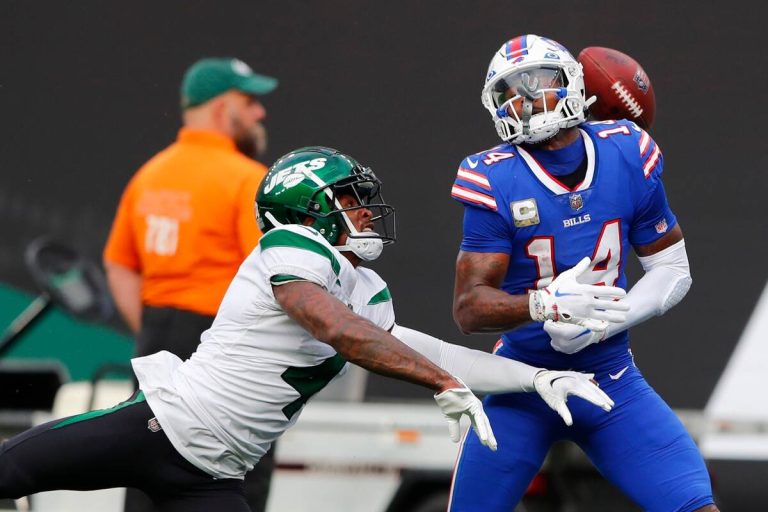 With apologies to Winston Churchill, halfway through the NFL season, handicapping the league remains a riddle, wrapped in a mystery, inside an enigma.

Bettors who have been waiting for the Raiders, Rams and Packers to bounce back are still waiting.

Gamblers who banked on the Bills to beat the Jets as 10½-point favorites Sunday were stunned when New York dealt the Super Bowl favorites a 20-17 defeat.

The Jets dealt New Jersey bettor Bob DeLuca an especially crushing blow. DeLuca, 68, entered this week as the front-runner to win the Circa Survivor contest and its $6.1 million prize.

He had six of the 123 entries that remained alive from the starting field of 6,133. But he went all-in on Buffalo and was eliminated when the Bills blew a 14-3 first-half lead. New York won it on Greg Zuerlein’s tiebreaking 28-yard field goal with 1:43 left.

It was the eighth time in nine weeks that DeLuca used the same team on all six $1,000 entries.

“Thank you to (Circa owner) Derek Stevens who gave me the opportunity to almost say I’m a millionaire,” DeLuca posted on Twitter (@CrushemSports). “I will be back with six entries and I will play it the same way I played this go round.

“Good luck to the remaining entrants.”

“It goes to show again, from week to week, that anything can happen in this league,” Red Rock Resort sportsbook director Chuck Esposito said. “There’s just so much parity right now.”

The Jets have as many wins as the Packers (3-6) and defending Super Bowl champion Rams (3-5) combined.

Green Bay lost 15-9 to Detroit as a 4-point favorite after Aaron Rodgers threw three interceptions, including two in the end zone, and the Packers twice turned it over on downs, including at the Lions’ 17 in the final minute.

“Every week, I hear someone say this is the week the Buccaneers or Rams or Packers are going to turn it around. But week after week they continue to play poor football,” Westgate SuperBook vice president Jay Kornegay said. “Even though the Bucs won this week, they still looked horrible.”

Bettors lost on the Raiders (2-6, 3-5 ATS) for the second straight week as they fell to 0-5 on the road in what was the biggest decision of a solid winning day for sportsbooks.

“It’s definitely not the season a lot of Raiders fans thought they’d have with big offseason acquisitions after making the playoffs last year.”

Dolphins bettors were tormented as they thrice went ahead by double digits over the Bears only to have Chicago answer with a TD each time.

After the Bears made it 35-32 midway through the fourth quarter, Miami (-4) drove to the Chicago 14, where a field goal would put the Dolphins in position to cover. Miami went for it on fourth-and-1, and tight end Durham Smythe was wide open in the flat. But Tua Tagovailoa’s throw was too low, and they turned it over on downs.

In painful fashion for Miami bettors, the Dolphins held on for a 35-32 win but didn’t cover.